Thanks to Look Mum No Computer, a super simple oscillator circuit has been popular lately based on the reverse avalance breakdown effect in normal transistors. I decided to experiment with this idea myself, and in particular see if I can add basic V/Oct control to it.

The oscillator core cosists of the timing capacitor C1 and in parallel transistor Q1 connected "in reverse". The base lead of the transistor is not used and should be cut off as short as possible to avoid picking up noise. The circuit operates by charging up C1 until it reaches the reverse breakdown voltage of Q1. When Q1 reaches breakdown it will suddenly allow current to flow through it, quickly discharging C1 again. Then Q1 resumes normal operation and the next cycle of the oscillator begins. Thus it is a saw core, and Q1 assumes the function of both the comparator and the reset switch found in traditional saw core oscillators.

I shifted the topology around a little bit, and referenced the oscillator core to +12V instead of ground. This way a normal ground-referenced transistor can act as a current sink to control the oscillator frequency, much like in traditional saw-core VCOs.

I used the exponential converter found in the Moog transistor ladder filter. It consists of a PNP buffer (Q5) and a NPN transistor (Q4) as exponential converter and current sink. Q4 and Q5 have roughly opposite temperature coefficients, providing a very rudimentary form of temperature compensation. In order to isolate the oscillator core from output loading, I added a darlington buffer to the output (Q2 and Q3). Finally the output is AC coupled to remove the offset voltage.

As others have investigated, many transistors are suitable in principle as avalanche oscillator, but their threshold voltage and other behavior differs. Of the transistors I had at hand, I found the 2N3904 has a threshold voltage around 9V, giving a suitable amplitude close to the 10Vpp modular standard. A list of suggested transistors can be found in Kerry Wong's article, but note that the voltages listed there are 3V higher due to the LED in series with the transistor.

The capacitor value sets the frequency range, I went with a smallish value to reduce the current needed from the exponential converter. Smaller values don't seem to work at all, which is a pity since reducing the current further would help with tracking and stability. A larger capacitor such as 1uF could be used for LFO-range operation (for electrolytic caps the + lead should connect to +12V).

I made a stripboard layout that fits neatly behind a 4HP eurorack panel, and a single drawing with all info you need to make your own: 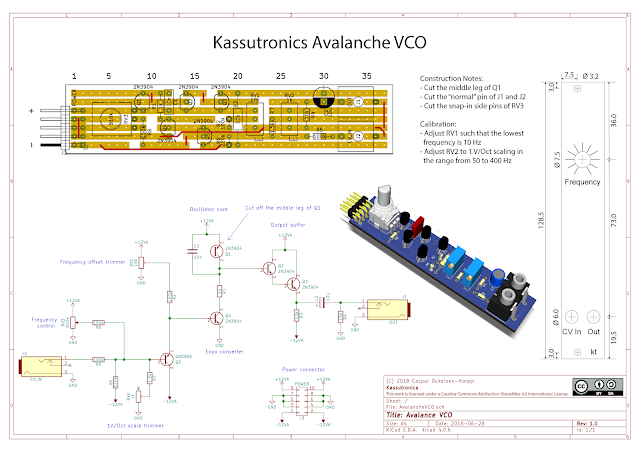 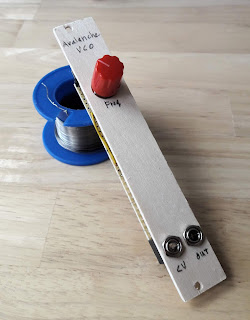 
So, you ask, how well does it track 1V/Oct? Well, for a synth VCO not very well at all, but for such a simple circuit I think it's not bad. I got it down to the following tracking error: 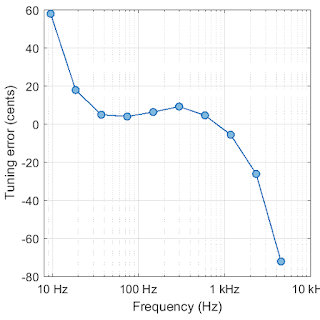 While the low and high end are horribly off, there is a range between about 30 Hz and 500 Hz where one could pull of a half-decent bassline or some drifting drone tunes. Drift, indeed, is probably a more serious concern since temperature stability is very limited. At higher frequencies self-heating (presumably of the expo converter Q4) is the biggest issue, causing the frequency to drift up when tuned to high frequencies.
Labels: Analog, Modular, Stripboard, VCO