This voltage controlled Wavefolder creates a rich spectrum of musical timbres, thanks to a smooth wavefolder core, integrated overdrive for added punch and clarity, and built-in VCA for ease of use. 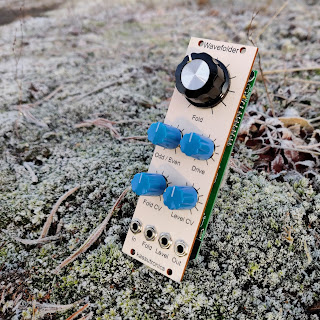 Wavefolders are one of the key elements in so-called West-coast synthesis techniques. When fed with a relatively pure waveshape such as a sine or triangle, the wavefolder adds harmonics to the sound by folding over the waves in some way. Thus, a wavefolder is essentially an extremely nonlinear amplifier, where the folds in the transfer function strongly distort the sound.

The character or timbre of this distortion depends however on the details of the transfer function. In this module, the wavefolding core is based on a series of simple transistor circuits, that create rounded-off folds for a smooth sound, somewhat (but not quite) like higher-order sine waves.

The amount of wavefolding is adjusted by the large Fold control. Starting with a nearly undistorted sound at the counter-clockwise position, turning up the Fold control adds folds one-by-one, up to the full 7 folds. Turning even further, the wavefolder leaves it's normal operating regime and starts to internally saturate and eventually clip. At this point it is perhaps not a proper wavefolder anymore, but that doesn't mean it doesn't sound good!

The Odd / Even control adjusts the transfer function to create predominantly odd or even harmonics, which each have a different character, or at in-between settings creates a fuller sound with all harmonics. The wavefolder core is followed by an overdrive circuit. Turning up the Drive contol adds warm saturation to the sound, and at higher settings starts creating a sharper edge, giving the wavefolder some punch. At extreme settings, the overdrive turns the once gentle sinusoidal folds into nearly ear-splitting square waves. The final step in the signal chain is an integrated VCA, with the output amplitude controlled by the Level control.

As with all synthesis techniques, wavefolders become musically interesting when introducing dynamics, i.e. changes to the timbre over time. To this end, the wavefolder has CV inputs for the fold amount and for the VCA, with an attenuator control for each. Adding just a little bit of Fold CV creates pleasent dynamics and satisfying bass sounds, while turning up the modulation depth releases all the chaos this module has to offer. The Level control does just what it says - control the VCA level (or output level if no signal is connected to the VCA jack) - but having the it closeby will come in handy to keep the wide range of timbres balanced in the mix.

For those who want even more CV options, at the cost of a little extra panel space, three expansion points are provided. Two allow for extra inputs for the Fold and Level CV, respectively, and the third adds voltage control over the Odd / Even knob. Wiring instructions for these are given at the end of the documentation.

Here is a demo video of the basic features, using only a sine wave oscillator and some envelopes: