This is a modified version of Yves Usson's Yusynth ADSR envelope generator, which is in turn based on an 1980 article by Jonathan Jacky and similar to the design published by René Schmitz. The design is based around a 7555 timer (a CMOS version of the classic 555) to provide the logic, and three diodes to guide the charging (attack) and discharging (decay, release) currents of the timing capacitor through different potentiometers. 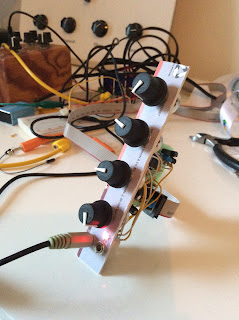 (Getting technical now, read ahead first if you want to see how the circuit works).

I first built up Yusynths version on a breadboard, and while it worked in general I had some issues with the diode forward voltages. For example during the release phase, the output voltage decays quickly (as set by the Release potentiometer) to roughly 0.7V, the diode forward voltage ('diode drop'). Taking a simple diode model, the diode would now stop conducting and the output would stay at 0.7V, which is not ideal but would be manageable. In reality, however, the diode still conducts albeit with much lower current. The result is that the output very slowly decays, reaching 0V only after 10s of seconds. The samey issue occurs during the decay phase. All this can be quite annoying, for example when modulating the pitch of an oscillator with the ADSR.

Surprisingly, I have not read about this problem elsewhere, even though it is an obvious and understandable issue with such diode based envelope circuits. Even more surprising, my Microbrute does not show this issue, although it almost certainly has the same envelope circuit (the Minibrute, at least, has the exact same ADSR). Well, anyway, I decided to fix it and my final solution was to use a type of precision rectifier in place of the decay and release diodes (hence the title). It's a bit of a special one, because it rectifies current in stead of voltage. The basic schematic is as follows:

The opamp's negative input is a virtual ground point. For a positive input voltage, a current flows through the resistor as defined by Ohm's law. This current flows through the diode into the opamp output. The output therefore is at a negative voltage, which compensates the diode's forward voltage drop. For a negative input voltage, however, the diode cannot conduct any current (the opamp will saturate at the positive rail). So, this circuit can sink a current, but not source any.

Here is the complete circuit of my implementation: 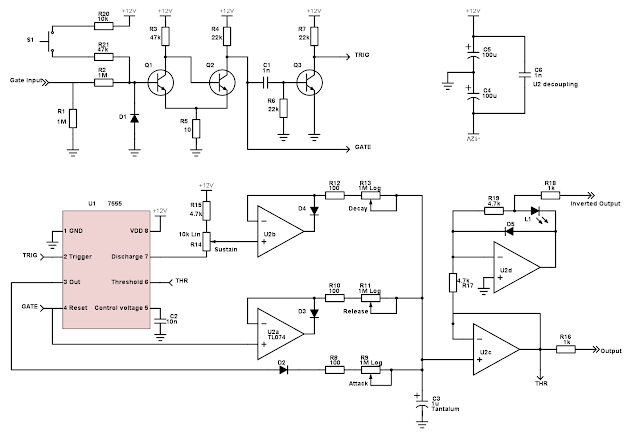 The first part of the circuit converts an incoming gate signal or button press into a well-defined gate signal (GATE) and a short trigger pulse (TRIG). Q1 and Q2 form a discrete Schmitt trigger, turning any input signal into a gate with sharp edges between 0V and 12V. C1 and R6 turn the sharp edge into a short pulse of a few 10s of microseconds, which is then buffered and inverted by Q3. So the TRIG signal is normally at 12V and makes a short pulse to 0V at the start of each GATE.

These signals are used to start the 7555 timer via the trigger and reset pins (these are both inverting inputs - e.g. a high input on pin 4 means not reset). The Out pin will go high (to 12V), and the Discharge pin will be floating. The timing capacitor C3 will start charging from Out thourgh D2 and the Attack potentiometer. The voltage over C3 is buffered by U2c, giving the envelope output.

The buffered output is also fed back to the 7555s Threshold pin. When this pin reaches 2/3 VDD (about 8V), the timer will switch off. Out will go low, so the charging will stop. At the same time the Discharge pin is connected to ground. R14 now defines a sustain voltage between 0 and 8V, and the precision rectifier of U2b/D4 allows C3 to discharge through the Decay pot to the sustain level.

The output will remain at the sustain level until the gate signal ends. When GATE goes to 0V, the U2a/D3 rectifier allows discharge through the Release pot until finally reaching 0V output.

Yusynth uses one additional opamp to invert the output, and one as a LED current driver, but I had only one opamp left. While the inverted output is not essential, I found these functions can be combined, which is done in U2d. This is again similar to a precision rectifier. R17 converts the envelope voltage to a current, which is then (for positive input) forced to go through the LED. Again, the opamp compensates for the LED forward voltage drop. The current also goes through R19, which gives the inverting amplifier function. This voltage is tapped of as second output. D6 is there such that the opamp never goes to the positive rail, which would be too much reverse voltage for a typical LED. 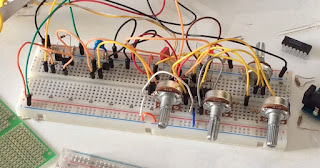 Version built on prototype board: 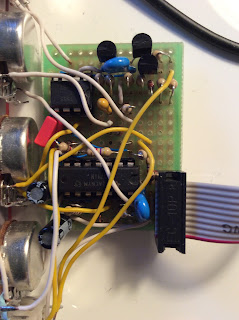 I used a piece of board designed for DIP packages, which turns out to work quite well for the discrete transistor stages as well. Most resistors and diodes are on their side to make it fit, and a bunch of jumper wires and solder bridges complete the connections. This is probably not the style for everybody, as the result is always chaotic, but it gives quite compact results for a prototype board (much more than the typical veroboard layout). The board is held in place only by the connecting wires. The front panel is a prototype cut out of cardboard (4HP eurorack size). 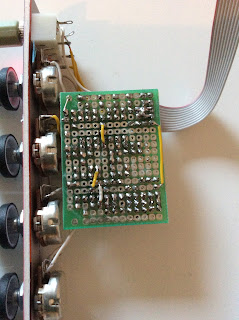 Finally a picture of the back. Note the generous use of solder. The three small wire bridges were needed because I accidentally inverted all the power lines when planning the board...

I'm quite satisfied with the result. The decay and release phases go nicely to their final level (sustain or 0 V, respectively) without any slowing down. A nice side effect is that the reverse leakage through the decay diode (which is now bigger because the opamp can create a large reverse voltage) compensates leakage of the timing capacitor and through other diodes, so the sustain phase stays accurate indefinitely. After the final release there is an output offset on the order of 10 mV (presumably the low voltage of the gate and discharge signals), but this is quite acceptable and it seems stable.

With the component values show, the shortest envelope is a bit under 1 ms (attack + decay), and the longest has about 1 second attack and decay/release with the same time constant. For longer envelopes a larger capacitor could be used for C3, or higher value A,D,R potentiometers. The shortest time is mostly limited by the (dis)charging current the 7555 and opamps are able to supply, and somewhat limited by the 100 Ohm resistors R8/R10/R12 (these can be omitted, but the difference is small).